A Brief History of Banner Pilot and the Internet | Banner Pilot
642
post-template-default,single,single-post,postid-642,single-format-standard,ajax_fade,page_not_loaded,boxed,select-theme-ver-4.2,,wpb-js-composer js-comp-ver-5.5.1,vc_responsive
June 20, 2011 In News

A Brief History of Banner Pilot and the Internet 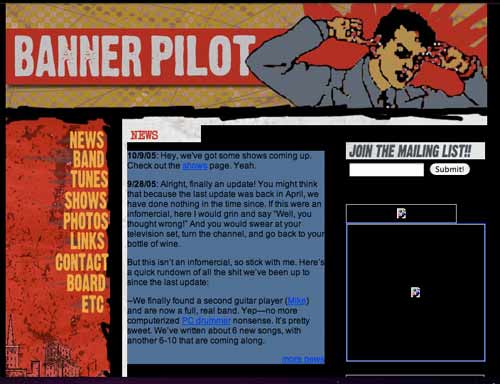 It was a pretty lousy website, but it did the trick. The message board proved to be awesome. It soon became nothing but spam bots talking to each other. Literally. Check out an archive.

Soon enough something called MySpace came along. “Finally, we can add blinking lights and glitter and glitches to our website!” we, along with thousands (millions?) of other bands thought. Actually, as awful as Myspace is — it is just a pile of garbage at this point — it was pretty slick at first. An easy way to post songs… people could communicate with you directly (“OMG FREE iPOD MINI CLICK HERE TAKE SURVEY!” and so on), you could post upcoming shows…. and with that, Banner-Pilot.com had no reason to exist and died of neglect, before finally getting an awesome facelift under new ownership. “What you need, when you need it”…. at least they kept our slogan.

Myspace worked OK for awhile, say, 2005-2009 (damn, that’s actually a pretty long time!) but its inner core of crap become more and more apparent over the years. So, since that time we have (like most bands nowadays) had a mixture of different sites: Facebook (for short updates that disappear one week later), Twitter (I think Twitter is awesome but it’s obviously limited), Bandcamp (for tunes), Tumblr (for longer posts), Storenvy (to sell stuff), and probably more I’m forgetting. Some of those, particularly Bandcamp and Twitter, are really really awesome sites. But it still feels kind of disjointed. Thus: BannerPilot.net. A way to centralize some of this stuff. That’s the slogan of this website!