Hey there! It’s been awhile since we’ve posted an update. Here’s some news:

-We’ve been working on a new album, on and off, mostly off. It’s slow going but we have a bunch of songs now and I think a lot of them are pretty great. We just need to flesh them out some more and hopefully we’ll have a new record for ya’ll before too long

-I started another band called Partial Traces awhile back. It’s a lot mellower, more indie pop/rock than Banner Pilot, so you might not dig it. Or, you might! You can check out our first album Glass Beach over at our Bandcamp page

-Fest and Pre-Fest a few months ago were our first shows in quite a long time and they ruled. Was super fun being back there and seeing a ton of friends

-We are playing Chicago at the Metro with The Lawrence Arms in April, definitely excited about that one. Tickets on sale this Friday. I bet you can figure out how to find them using Google or whatever.

That’s about it, I think? New shows and new tunes soon*, check back! – Nate

Hey, Nick made a couple of super cool videos for songs off of Souvenir. Modern Shakes and Dead Tracks, check ’em out! – Nate

Have seen a few of these tattoos now— super cool! If you were thinking about getting a tattoo, but weren’t sure what to get, just get one of these. Easy! Thanks to Geffen Refaeli for the rad album art. Check out her other stuff, too; hell, you could tattoo your entire body! It’ll rule! – Nate

We are back from Europe– it was a great time as always, although it got slightly hairy a few days in. I posted a handful of quick things on Facebook while we were over there; they are collected here for your reading pleasure. – Nate 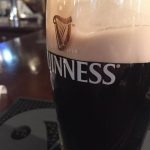 irst day in Paris was a blast. Lots of walking around, vaguely jet-lagged, in perfect weather, up along the seine and through the neighborhoods. Kind of a cliche but hanging out under the Eiffel Tower drinking cheap beers we bought from some guy walking around with a bucket was pretty awesome. I think if we had another round we probably would have purchased one of the laser pointer toys he was also encouraging us to pick up. We also spent a stupid amount of time at a random Irish bar next to our AirBNB, where we learned a great game called Guinness Percision. You take a single sip/gulp and try to get the beer line (not the foam line) to rest exactly between the harp and the Guinness text. See attached photo. Took some practice! But Joe got it twice, Jeff once, and Danny once. I was pretty bad at it. On to Lyon! Playing at Ayers Rock Boat, hope to see you there!

April 23
Our first show ever in Italy ruled. Really fun time. I slipped on a lemon peel after the show (really) and totally messed up my knee, so that’s lame. Definitely the worst thing a lemon has ever done to me; usually I like them. But besides that, it’s been awesome here! Had some excellent Pizza and beers next to a lake, and then checked out a castle. Two more shows here, and then on to Slovenia

April 25
Man, Italy was so much fun. Had another great show last night. Such a friendly, enthusiastic crowd. Hung out on the patio until 3am drinking beers and discussing metal records, and I realized the “duh-nuh-nuh-nuh, nuh-nuh-nuh” system of expressing metal riffage is truly universal and transcends language. We were also trying to recall Megadeth lyrics and I only came up with one, “You take a mortal man / and put him in control” (followed by the aforementioned duh nuh nuns) How many can you remember, top of your head, no cheating? The Megadeth Lyric Challenge. Maybe it’s easy and I’m simply not a metalhead. Anyway: Great times! Slovenia is up next – Nate 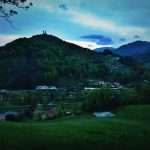 In case you weren’t sure, let me confirm it: Slovenia knows how to party! Also a rad looking country; you can almost see the venue from this photo

April 27
Thanks, Budapest! Another great show in another beautiful city. Special shout out to our new friend who drove all the way from Serbia to see us. Walked around for 5+ hours today and it was great. And at the end of the walk, I was able to eat my first taco since leaving home. It wasn’t a bad taco, either. Day off today. Going to check out Off With Their Heads in Vienna. See you there? After that, three shows in Germany. Looking forward to it. 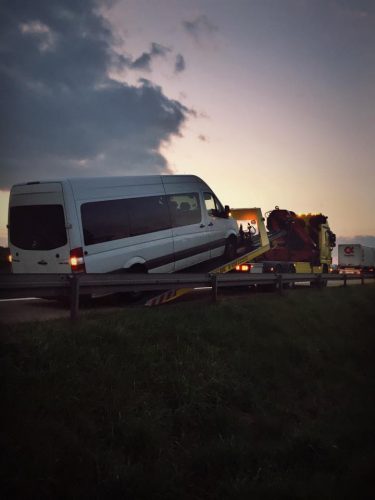 Yesterday, traffic was at a standstill and a truck bumped into us as we nudged into their lane. Not a big deal, their fault, but minor, and then… These two screaming truckers are running up to the van, ripping open both the driver and passenger doors and waving around wildly like they’re going to start punching us. Lots and lots of screaming in rapid fire German. We shut the doors. They opened them again. Repeat. One of them then ripped the driver mirror down. Broken. Finally we pulled away, assuming they were going to follow us off the exit, but there was a cop car there so they just continued on. We talked to the cop but didn’t get their license so we gotta eat the cost of the mirror repair I guess.

And THEN — after being stuck in standstill traffic for a couple hours — the van started making weird noises, died, and suddenly we’re stranded on the side of the damn autobahn! Sun’s going down, cold out, and there are cars zipping by inches from the van at 100+ miles an hour.

Kind of crazy day! But then we called a tow truck, got towed to a mechanic, got picked up by OWTH, got to the venue and played possibly the best show of the tour. Thanks, Nurnberg! Now we’re hanging out waiting to hear from the mechanic. Hope we can make the show tonight, wish us luck! Oh yeah, also breakfast in Vienna was really good yesterday. So that was cool. First guacamole of the tour, nice

April 29 Part Two
Update: the van will not be fixed today. Secured a one-day van rental here in Nurnberg. While we picked it up, the other guys started bringing all our stuff down from the apartment we were staying at to the street. Idea being, we’ll pull up and take off right away for Weisbaden. We show up, and find out that somehow the door closed behind them while taking a load downstairs. The guy’s only key is locked inside. So now we are driving to his grandparents’ house to get the spare key. 40 minutes round trip.

Once we get the key, and get back to his apartment, and get the rest of the stuff, and get on the road, and get to Wiesbaden, and then get back to Nurnberg after the show, and then (hopefully) get our own van fixed tomorrow morning, we will be back on track!

April 30
So, two days later and the mechanic still has not fixed the van. Stranded in Nurnberg again. Looking like we are going to have to rent two mini vans to get to Uncle M Fest tonight, and the hopefully Groezrock from there. I don’t suppose anyone is sitting on an awesome solution here? Like, you live in Nurnberg and have a new touring van you were hoping to break in? You’re the inventor of a tour-by-helicopter system and would like to test it on someone? Let us know!

May 1st
In a 48 hour stretch we had three rental vans, one tow truck ride, three cab rides, three shows that we barely got to, one near fist fight on the highway with some angry truckers, one hour on the side of the autobahn, one stranded box of vinyl records, six or so hours of standstill traffic, one van engine that turns out to be completely destroyed, one key accidentally locked in an apartment, one half-drunk late night conversation about 1970s snare sounds versus 1980s snare sounds, one viewing of Terminator 2, and so much more.

And after all that….. we’re on the road about one hour from Groezrock. Boom. Let’s party!! We play tomorrow but will also be selling merch today. Stop by!

May 4th
Man, Groezrock was so much fun. Had a great show and it was a blast checking out other bands and just wandering around running into people. Never really checked out Refused before, to be honest, but watching them from onstage was pretty unreal. Special shout out to Kate and Alexander for bringing us our missing box of vinyl all the way from outside Nurnberg. Totally saved us.

Eindhoven was also great, despite the fact that all of us felt like we had been awake for 11 years in a row. Nick, the promoter, was an excellent host– showed us around Rotterdam and schooled me in FIFA on XBox 6-0. I was pretty proud of myself for keeping him to single digits.

Now we’re in Paris for the final show of the tour. Despite all the van chaos in the middle, this has been a really really fun tour. Lots of fun shows and great sights and incredibly friendly people.

Oh, also we just paid a parking meter a little bit ago and couldn’t tell if the printed receipt was saying it was successful, or that the transaction failed. So I tried to speak the French into Google Translate and it returned, “It brings ancient beasts. Fear watch is kept on the bird.” Ruh-oh. I pictured placing it on our dash and having a parking attendant start screaming, “N-no! NO! You don’t realize what you have done!” So anyway, apologies if we just unleashed the apocalypse but stoked for the show tonight!