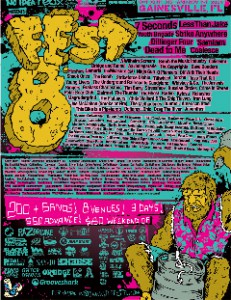 Egads, there’s a whole 10 days of tour that I was too lazy to write about while we were on the road. Better do it now before I forget about it. After I catch up, I’ll start using this blog to write about the process of writing songs for the next album. This might prove to be rather inane, but we’ll see!

Anyway: the tour. Last update was about Richmond and their tiny-style bowling alleys. After that we had a day off (spent mostly driving and briefly hanging out in the always-fun Savannah), and then we made it to Tampa for the annual pre-Fest show.

We missed this last year but played in 06 and 07, and it was good to be back. Always a blast hanging out in the parking lot with people, and it’s a good way to catch bands that you know you’ll miss over the actual Fest for whatever reason.

While we were hanging around outside some kid tried to jump from the top of one van to the top of another van, didn’t make it and fell hard to the ground. Pretty messed up. Ambulances came and took him away. I never found out what happened to him, but hopefully he was ok and just ended up with minor bruises and what not.

Besides that, it was a good time. The rest of the weekend was spent in Gainesville, of course, for The Fest. Always one of my highlights of the year, and this time was no exception (unless the remaining 6 weeks of 2009 prove to be so awesome that Fest feels so-so in comparison. But I have a feeling that will not happen). This year I caught a lot of great sets: Cheeky, Bad Friends, A Wilhelm Scream, Stoned at Heart, Smalltown, Jonesin’, Too Many Daves, D4, Dear Landlord, Copyrights, The Measure, Good Luck, Panthro UK United 13, Broadway Calls, OWTH, The Arrivals, Tiltwheel, etc etc. Sweet.

As for us, we had a cool mix of shows: 2:30pm Saturday, where people seemed to be into it but were mostly sober or hungover, and then that night at 2:30am in a warehouse, where it appeared that everyone had been tied up to a grain alcohol IV all day, and went nuts. That warehouse show was maybe the best show of the whole tour, actually. We played Skeleton Key live for the first time ever, figuring that if we screwed it up everyone would be too drunk to notice. But it turned out ok! I think!

All in all, a great time