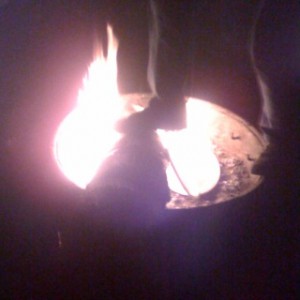 Originally posted 8/27/08 on our Typepad blog

Man, we must have partied pretty hard the night after Portland– we camped out by the ocean and I remember we had a (loud) conversation about how the log in this picture looked like a hipster worm. As the campers nearby tried to drift off under the stars and ocean mist, they were kept up by rambling slurring along the lines of “This worm would be all like ‘I saw Husker Du in a basement.'” The next morning it just looked like a charred log. Sorry, fellow campers! We thought we were on to something.

The camping spot was neat, though— the next morning I thought there were a half a dozen people admiring our pile of beer cans, but it turned out they were checking out a huge elk a few feet from our van. It was funny because a couple days earlier in a motel we watched some elk hunting show where these two jokers crept through a field (to dramatic music in the background) and killed an elk with a crossbow, acting as if they had just pulled of a crazily difficult task. “Yeah!” they yelled as they examined the carcass. “Oh man, yeah!” Anyway, the funny thing is that this elk by our van barely moved, even as people got within a few feet of it. So what’s so impressive about shooting one? It’d be like bragging about shooting a cow.